Our journey to Yaxchilan Ruins had us heading down the Usumacinta River in Chiapas, Mexico. Located a fair distance from the Riviera Maya, the state of Chiapas is environmentally diverse with pasture lands, mountains, jungles, rivers, waterfalls and canyons. Culturally, Chiapas is rich with colonial cities, and has a long history of Mayan settlements.

The Usumacinta Province in Chiapas – Mexico

Yaxchilan is one of many Mayan archaeological sites located along the Usumacinta River, the borderline between Mexico and Guatemala. The area is referred to as the “Usumacinta Province” with settlements sharing architectural features that define the area. Cities fought for power throughout the centuries which makes the history intriguing and packed with interesting stories. Read more about this area in our review of the Bonampak Ruins that shows another influential Mayan settlement on the Usumacinta River. 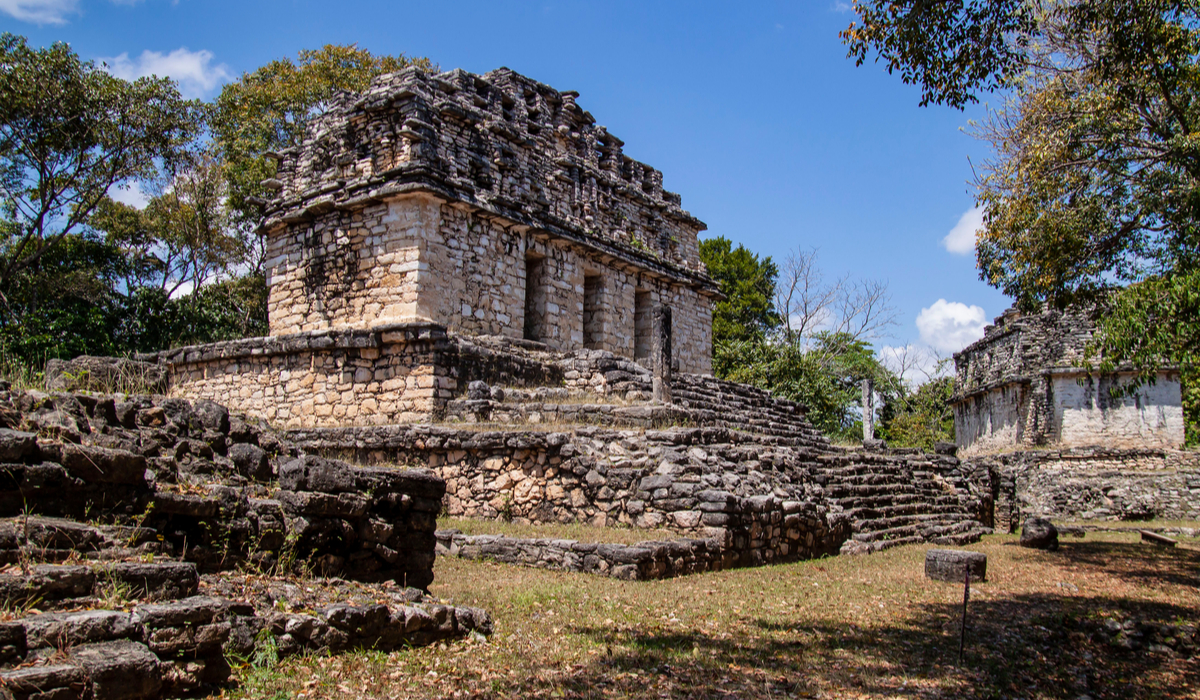 The settlement existed from 350 A.D. to 850 A.D. with the height of its power ranging from 650 A.D. to 800 A.D. In 654 A.D., Yaxchilan found itself at war with Palenque in a fight for power and land. From 681 to 742, the city remained relatively small but grew to a regional capital that lasted into the early 9th Century. 740 AD was the building hey day when the famous lintels were carved and created. It is these architectural details that tell the story of Yaxchilan and enabled archaeologists to unravel the Mayan history in the area.

The first published documentation of the site seems to have been a brief mention by Juan Galindo in 1833,with exploration starting in 1882.Study and documentation has continued throughout the 20th and 21st Century by many national and international groups.

The ancient name for the city was Pa’ Chan meaning “cleft (or broken) sky” but the Mayan name, Yaxchilán, means “green stones.” Today, some Lacandon Maya still make pilgrimages to Yaxchilan to carry out rituals to the Maya gods.

There are more than 120 structures in the central area of Yaxchilan that make up three complexes: the Great Plaza, located in the lower part parallel to the river; the Grand Acropolis; and the Small Acropolis. All of these areas are skillfully adapted to the contours of the low limestone hills and attach to each other with the use of terraces, stairways, and platforms. Highly decorated temples, pyramids, and luxurious palaces clustered along the grand plaza extend along the shores of the Usumacinta River.

The highlight of the buildings are the stelae, lintels, alters, stairs, bas-relief stucco carvings, and mural paintings. Almost every building has a doorway decorated with carved lintels that tell a story through some of the best preserved carvings in the Mayan world.

What We Love About Yaxchila

We love the diverse and rich landscape of Chiapas. Yaxchilan is a great excuse for us to get out of dodge and experience a different Mexican landscape. We like to take the trip from Palenque or San Cristabol as these stops add to our adventure and knowledge of the Maya. The boat ride is a blessing and makes this Mayan ruin adventure a true adventure.

Travel by rental car or public bus to San Cristabol or Palenque. From there is it recommended to hire a tour company to get you to Yaxchilan or you may spend days trying to connect cars, with boats, and buses. Be ready for a 45 minute boat ride to the ruins. Many companies combine the day with a trip to Bonampak Ruins, which is not a bad idea.