Xel-Ha Ruins seems to be missed as people head to the Tulum Ruins overlooking the coast or venture into the Xel-Ha Eco-park. The Xel-Ha settlement has an important trade history and houses some great murals not found in Tulum or Muyil. The cenote located on the west end is a nice surprise and historical asset. Take a moment to stop into the Xel-Ha Ruins in the Riviera Maya. You will discover more about the Maya and the importance of coastal settlements.

Origin of the Xel-Ha name

The name Xel-Ha is Mayan for mixing of the waters, an appropriate name that refers to the fresh and salt water inlet on the coast that was used by Xel-Ha. The first dwellings in Xel-Ha date back to 100 BC through 400 A.D. but were mostly wooden houses on limestone platforms. From 400-700 A.D. a more complex and organized society emerged where stone buildings with Peten architectural influences were constructed. These buildings were closed plazas, temples, and elite residential structures.

Overview and History of the Xel-Ha Mayan Ruins

Xel-Ha ruins are located on the coast but not overlooking the Caribbean Sea like the Tulum Ruins. The ancient Maya used the Xel-Ha lagoon, which is now a part of the Xel-Ha Eco Park, as a maritime port but built their settlement in the jungle.

Between 700 and 1200 A.D. Xel-Ha increased their connections with other inner cities of central Yucatan. Their port became an important piece to the growth experienced within the Yucatan. As the importance of Xel-Ha grew, so did their settlement. Their ties to inland Yucatan are concluded from the pottery found on site and the introduction of new architecture built on top of older buildings. Xel-Ha was part of the Ecab Province until the arrival of the Spanish in 1527.

The Xel-Ha ruins has several small stone temples and two cenotes. The entire site can be seen in approximately an hour and there is seldom anyone there. Note the murals found in buildings throughout the site that show both red and blue paint. Blue was a spiritual color for the Maya and is found in Xel-Ha more frequently than other settlements. 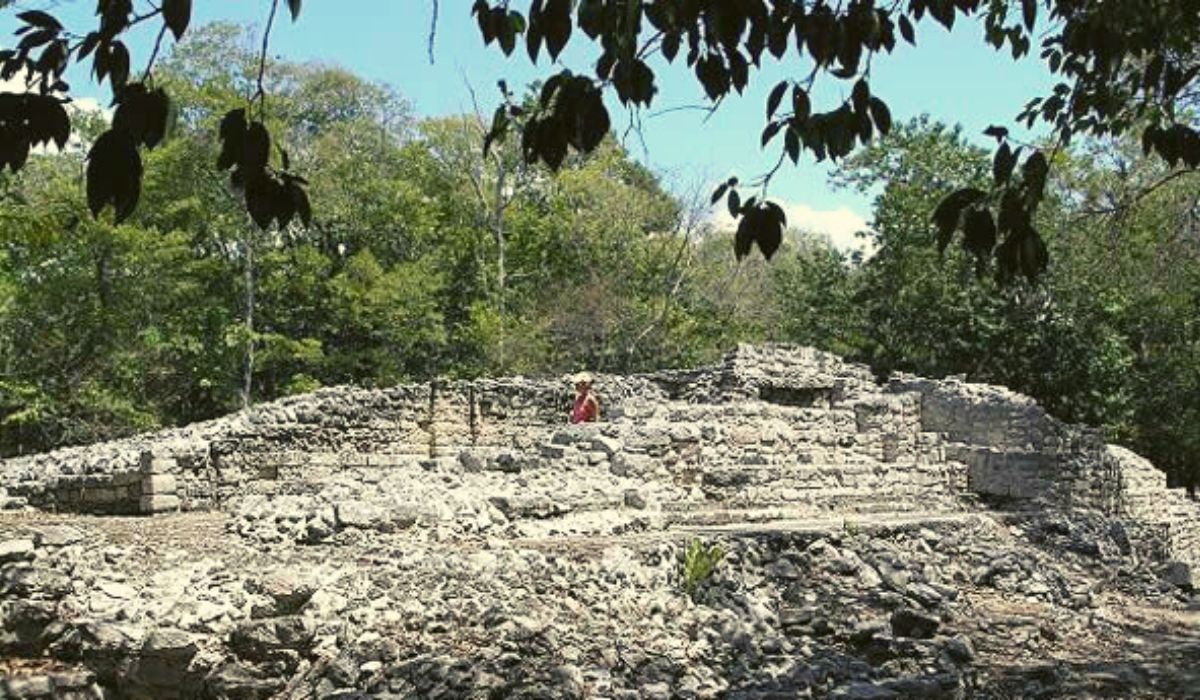 Xel-Ha is thought to have played an important role in the spiritual development of the Maya. The port provided direct access to the Island of Cozumel, previously known as Ixchel, and honored the Maya goddess of fertility. Cozumel was part of an essential pilgrimage where Maya men and women performed their fertility ceremonies before marriage. Couples from all over the Yucatan and Central America would come to Xel Ha to access Cozumel.

Structural Highlights at the Xel-Ha Ruins

Lothrop Groupo is a residential complex that was constructed during the Late Post-Classic,1200-1550 A.D. Visitors can view the remaining bases and platforms that have an elliptical shaped floor plan. This design is unique to Xel-Ha and is the only instance of this building style found in the area.

Pintura Mural 1 is a series of red panels, completed during the Early Classic period (300 A.D. to 600 A.D.). The glyph “Ahua” is portrayed in the murals and represents the chief or lord of a settlement. The mural also has bird imagery included in its story. One group of birds belongs to a species of yellow parrots having short tails and yellow beaks. The second group of birds shows red birds with yellow wings, long tails and black beaks. The mural is colored in yellow and sienna red all on a white background.

Pintura Mural 2 is a symmetrical composition divided into four rectangles. The first rectangle shows a checkerboard style with red, gray and yellow squares. The main motif is a huge anthropomorphic figure with a head dress, bracelets and necklaces. It is painted in sienna red, turquoise blue, white, and yellow. The mural shows stylistic influences from Teotihuacan and dates from the Early Classic (300-600 A.D.).

El Palacio encloses the plaza’s southeast side and was constructed in stages. The first stage includes a rectangular base with rounded corners and sloped walls. Two rooms entered from the east and west were built atop it. The west room has an entrance with two wide pilasters that form three door openings. The ceilings in both rooms were originally vaulted, but today nothing remains. Later, a series of stone overlays were added to the building. There are two interconnecting rooms on the north side. In the final construction, all rooms were encased with large stones, thus transforming the building into a large platform.

Sacbe Road leads from the Palacio to the west side of the settlement. Visitors can walk the Sacbe that is now overgrown with trees and plants. If jungle trekking is not your thing, take the newly created path found to the north. We found the Sacbe route to be entertaining and authentic. Watch for iguanas as they seem to rule the Xel-Ha Ruins. Note the color of the rocks as you walk the 500 meters to the cenote. Blue and red paint is easily seen on random stones found in the jungle.

The “Jaguar Group”, the “A” and “B” groups and the “Pier” are located at the west end of the site. The buildings in this area have architectural traits known as the “East Coast Style.” Small temples have vaulted or flat roofs, inset lintels and slightly slanted walls on the outside. Look on the inside of the temples to view murals created in this grouping.

Two cenotes – freshwater pools – are located within the Xel-Ha archaeological site. The larger of the two cenotes is on the western edge of the ruins with interesting structures located right next to it. This area is easily accessible via paths in the site.

The Xel-Ha ruins are overshadowed by the more popular attraction of Xel-Ha Eco-park located across the highway. We recommend combining both excursions into one, visiting the ruins in the early morning, and spending the rest of the day at the eco-park enjoying more history, flora and fauna and water activities in the historical Xel-Ha lagoon. If you are looking for a great Mayan ruin day, skip the Eco-park and complete the ruin trifecta – Xel-Ha, Tulum and Muyil.

What We Love About the Xel-Ha Ruins

We love that the ruins can be easily accessed en route to another coastal ruin site or before entering the Xel-Ha Eco-park. Every time we visit we are the only visitors in the settlement and find the solitude a welcomed benefit. The iguanas that rule Xel-Ha are wonderful to watch, but the colored rocks found randomly throughout the site were intriguing. Throughout the site, no matter where we walked, red and blue stones are found all over the site.

Getting to the Xel-Ha Ruins