The Magic and History of Uxmal

The name Uxmal means ‘thrice-built’ in Mayan. This name refers to the construction of its highest structure, the Pyramid of the Magician which was built on top of existing pyramids. In this case, five stages of construction have been found.

Uxmal was one of the largest cities of the Yucatán peninsula on the Ruta Puuc (Puuc Route), and at its height was home to approximately 20,000 Maya. Uxmal and other surrounding Puuc sites flourished in the Late Classic Period (around 600-900 AD) before they were overruled by neighboring settlements. The rulers of Uxmal are also thought to have presided over the nearby settlements of Kabah, Labná and Sayil. There are several sacbes (white roads of the Maya) connecting the nearby sites. 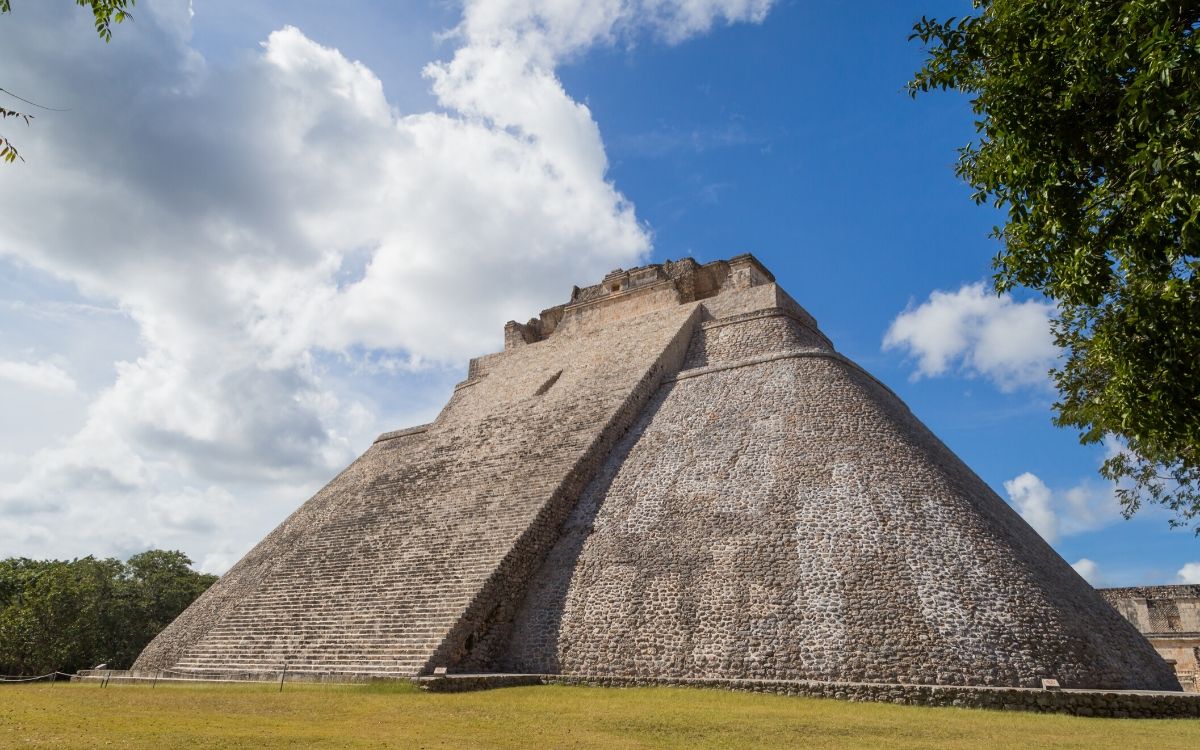 Uxmal Architecture -A Notable Asset of this Mayan Region

In our travels we have experienced varying architectural styles throughout the Yucatan. Many Maya sites were built using a combination of these styles. Uxmal and other sites located on the Puuc Route are comprised of only one architectural influence that comes directly from the Maya.

Puuc architecture is easily identified. The lower sections of the buildings are plain, have rounded corners, and are made of small arches or entrance ways. Upper sections are highly decorated and reflect a distinct layering of stone work. Ornate carvings include serpents, lattice work, and pillars.

Puuc construction used a system of cut veneer stones set into a concrete core. This is an improvement over the previous construction method of using stones held together with plaster. This advanced construction method allowed for slightly larger and more stable interior rooms and may account for the excellent condition of many of the thousand-year-old buildings at Uxmal, Labna, Sayil and Kabna.

The Importance of the God of Rain

Chac was the Mayan god of rain, and the honored god at Uxmal due to the lack of natural water supplies in the city. Unlike other archeological sites in the Yucatan, Uxmal does not have an on-site cenote (fresh water source). Although the Yucatán has few surface rivers, most Maya cities, including Chichén Itzá, used cenotes to access underground water, however there were no cenotes at Uxmal. Instead, it was necessary to collect water in chultunes, or cisterns, built in the ground. 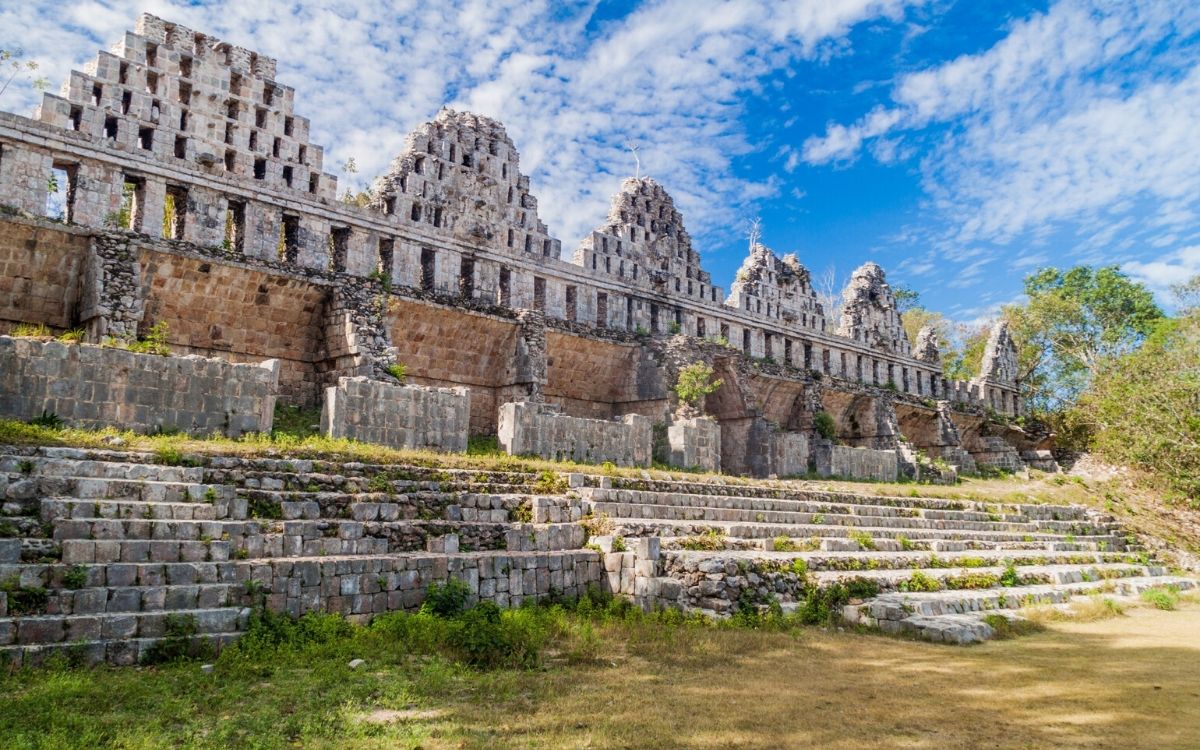 Overview of Uxmal Buildings and Pyramids

The site of Uxmal has fewer buildings than archeological sites like Chichen Itza. The below explanation is a full list and description of each building at the site.

The Pyramid of the Magician is the very first building you will see when you walk into the Uxmal Archeological site. The pyramid stands 117 feet (38 m) high and was built on an elliptical base, an unusual style found in few Mayan pyramids. Excavation of the pyramid found that the pyramid was built on five superimposed temples. Parts of the first temple can be seen when ascending the western staircase. The second and third are accessed by the eastern staircase in an inner chamber at the second level. The fourth temple is clearly visible from the west side, a giant Chac mask marks the entrance and Chac’s mouth is the door! At the top of the east stairs is the fifth temple. The building was named after a legend about a dwarf boy challenged to build a pyramid in one evening. The result of this challenge is the Pyramid of the Magician.

The Nunnery Quadrangle is a collection of four buildings beside the Pyramid of the Magician. It was named Casa de las Monjas (The Nunnery) by the Spanish, not the Maya, as the 74 small rooms that face the inner courtyard reminded them of a Spanish convent. Each of the four buildings has a unique ornate facade and each is built on a different level. The northern building is the oldest and the grandest. The Nunnery is a wonderful example of typical Puuc architectural styles, including Chac masks, serpents, pillars, and lattice work. The building to the east, and closest to the House of the Magician, is the best preserved of this group, with a stack of Chac masks over the central doorway, and serpents above the doorways to the left and right.

The Palace of the Governor is regarded as one of the best example of Puuc architecture in existence. The Palace of the Governor stands on a raised platform and is thought to be one of the last buildings constructed on the site (around 987 AD).The carvings on the top section are of serpents, lattices and masks, but it is the god-like figure with a long plumed head-dress centered in the middle of the building that really steals the show.

House of the Turtles is next to the Palace of the Governor and on the same raised platform. The building is named after the frieze of turtles carved around its cornice. It was believed that turtles suffered with man at times of drought and would also pray to Chac for rain.

The Great Pyramid to the east of the Palace of the Governor was originally nine levels high and has only been partially restored. It seems that another temple was to be superimposed on the existing structure and some demolition had taken place before the plans were halted, leaving the pyramid in poor condition. You can climb to the top of the great pyramid, which provides incredible panoramic views of the Uxmal site.

Temple of the Doves is beside the Great Pyramid and named by John Stephens for its ornate fretwork and roof combs. To Stephens, the top of the temple looked like a dovecote. The structure has a richly decorated lower story, unlike other buildings at Uxmal, and is thought to date to the earliest phase of the town. This structure is part of another Quadrangle that was destroyed and found in the excavation of the site.

What We Love About Uxmal

Uxmal is located a distance from the Riviera Maya, so an overnight stay is a must but a welcomed addition to the visit. We love the hotels near the ruins, that we can enter the ruins when they open, and take in the evening sound and light show. Local hotels have restaurants, pools and nice rooms so your stay will be a great getaway. We always add Labna, Sayil, and Kabah to our trip as these ruins sites are around the corner from Uxmal.

Update 2015 – With the new toll road out of Playa del Carmen it is possible to make this a long one day road trip. The combination of the new Playa toll road, the Merida toll road and the fast route via the 180 hwy, an early morning start could have you there in approx. 4 hours. We still love an excuse for an overnight as the nearby hotels are great places to stay.

From the Riviera Maya, the drive to Uxmal is approximately 6 hrs. There are a few ways to reach the ruins that take you via Tulum on the back roads, or on the toll highway past Merida and to the south on highway 180. The Ruta de Puuc and the ruins of Uxmal have great signage and are easy to find.

From Merida, you can take Highway 180 to Muna and then Uxmal, a fast and up to date highway that will shorten the trip to Uxmal. For those of you that like back roads, which we do, Highway 261 starts just south of Merida and has you traveling along the famous Ruta de Puuc.