The greatest attraction at the Tulum Ruins is its location. Built on a bluff facing the rising sun, this ruin site is the only Maya settlement located on the beaches of the Caribbean. The views continue to be described as spectacular as millions of people visit this Maya ruin in the Riviera Maya.

Ruins in the Riviera Maya

In the Yucatec language, Tulum means “wall”, referring to the large barricade that surrounds the settlement. In the Mayan language, Tulum was called Zama, meaning “dawn,” an appropriate name given its eastern location. It seems “Tulum” is the name given to the site by explorers Stephens and Catherwood in 1841. Stephens and Catherwood visited Tulum just before the beginning of the Caste War in 1847, long after the city was abandoned. Their visit to Tulum is outlined in their famous book “Incidents of Travel in Yucatan”. It is important to note that Juan José Gálvez is actually credited with Tulum’s rediscovery in 1840. 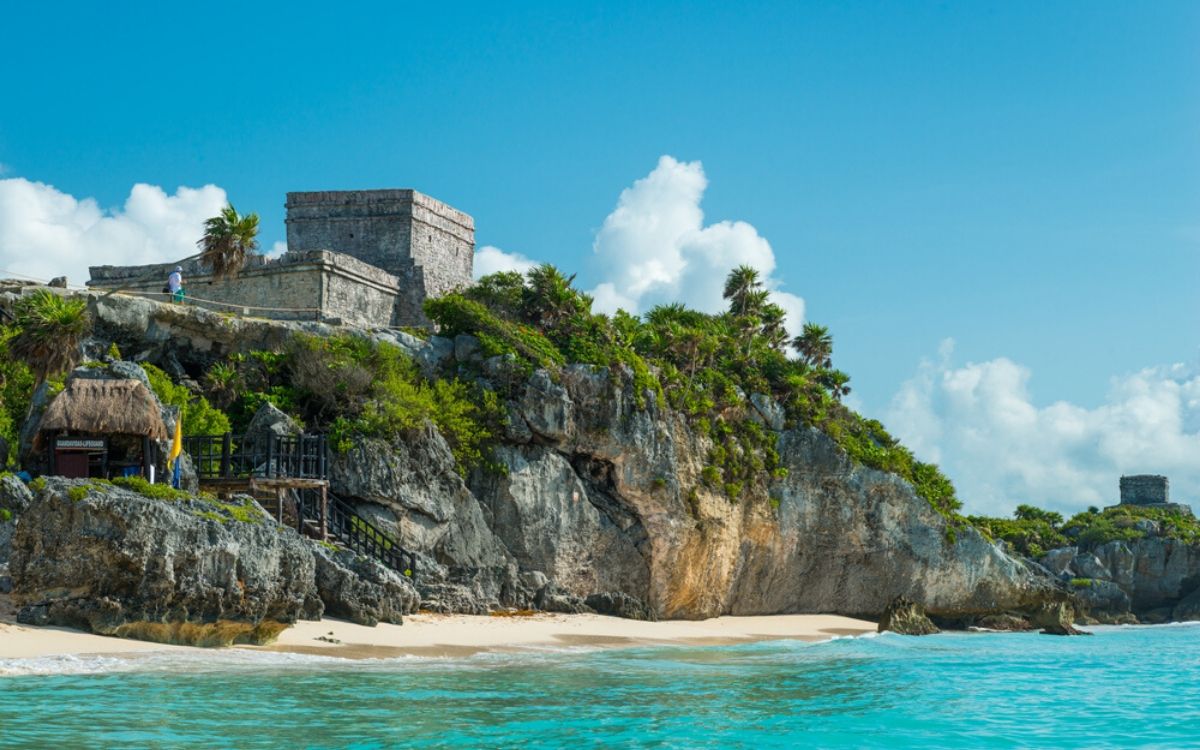 History of the Site

The earliest date found in the site is A.D. 564 , an inscription on a stelae. This places Tulum within the Classic Period, though we know that its heyday was much later, 1200 – 1521 A.D., during the Late Post-classic Period. Tulum was the primary location for the Maya’s extensive trade network with both maritime and land routes converging here. Artifacts found in or near the site confirm contact with Central Mexico and Central America. Archeologists found copper rattles and rings from the Mexican highlands; flint and ceramics from the Yucatán, and jade from Guatemala. Tulum was the hub for international trade and responsible for the distribution of goods into the Yucatan through Coba, Chichen Itza and connecting settlements. Tulum was thought to also be a religious center for priests with the walls protecting the sacred leaders.

Archaeologists have evidence that the population was killed off by the Spaniards when they introduced Old World diseases into the area as a way to destroy the native population. Tulum remained inhabited about 70 years after the Conquest, when it was finally abandoned. Documentation of this demise can be found in the writings of Friar Diego de Landa’s Observations on the Yucatan Peninsula. Local Maya continued to visit the temples to burn incense and pray until the late 20th century. 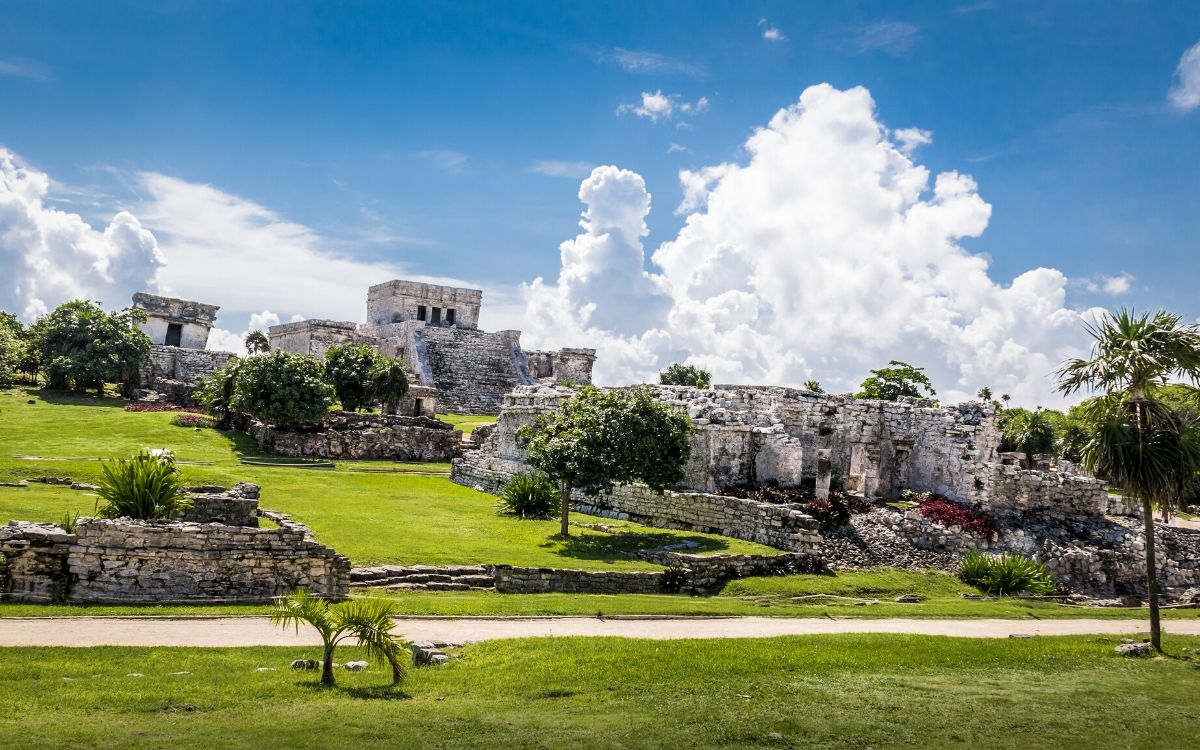 Principal Structures of the Tulum Ruins

When visitors arrive at Tulum’s ancient pre-hispanic site they see the buildings that, in its time, were the city’s main center where ceremonial and political activities took place. Around this wall were a number of thatched wooden houses that were homes to workers but little evidence exists of these residential homes.

City Square – El Castillo – The Castillo, sometimes referred to as the lighthouse, is the tallest building within the Tulum settlement and the most famous. It stands forefront on the bluff, commanding a view of the ocean and coast for miles. The structure underwent several building stages with the lintels of its upper rooms carved with the plumed serpent motif. The rooms themselves are vaulted in classic Mayan style. A tiny cove lies at the foot of the Castillo where trading canoes would slip ashore.

Secondary Structures at the Tulum Ruins

The Temple of the Initial Series façade bears several stucco figures. The stelae that holds the earliest date found in this site, was located in the interior of this building. The Temple of the Frescos is filled with murals that are significantly affected by time and the elements. The temple shows traces of several building styles.

The House of the Columns is more complex than most structures at the site. It’s a palace-like structure with four rooms whose principal entrance faces South. Six columns support the roof of the main room and top sanctuary.

Located to the North of El Castillo, the Kukulcán Group, is identified by the minor structures grouped in this area. The most outstanding structure in this group is the Templo del Dios del Viento (temple of the god of the wind), named after its round base. Traditionally the god of the wind, Ehécatl from Central Mexico, was related to Kukulcán. Two watchtowers are located on the west facing wall that also hold religious altars.

The Port and Beach – The beach located at the base of the Tulum Ruins was an important part of the Tulum settlement. This area is where Mayan ships, dedicated to trade around the Yucatan Peninsula, docked. Today visitors use this area as a place to swim, snorkel and rest.

What We Love About the Tulum Ruins

We love the views of the Caribbean. Hands down this makes Tulum special. What we also appreciate is the amount of information that is shared about Mayan history when you enter the site. When we first entered the Tulum Ruins in the early 90’s an original entrance through the Tulum wall was the only way to enter and exit the site. Today, INAH has created a wonderful introduction to the history of the Maya as you make your way into the grounds of Tulum.

Use your visit to the Tulum Ruins as a way to further investigate the beaches and pueblo of Tulum. The town and beach are both wonderful day trips to the area, unless you have decided to stay in one of the beachfront hotels.

Being Quintana Roo’s most known and advertised site, Tulum is a “not to be missed” archaeological site. The site is open from 8AM to 5PM, everyday. Parking is available just off the highway past the first set of lights when you enter Tulum.

The 800 m journey between the parking lot and the site’s entrance can be walked or if you are looking to avoid the tropical heat, a small family-run tram will take you to the entrance. Note: Most tour buses arrive at 11AM so consider planning your tour either before or after this time to enjoy the Tulum ruins without the crowds.

There is a registered guides association offering services at the ruins site, a service well worth the fee if you want to learn more about the significance and history of this Mayan ruin.