A Part of Uxmal’s History

Just south of Uxaml on the Ruta Pucc (Hwy 261) are three small ruin sites considered the suburbs of Uxmal. Few visit these small sites as Uxmal towers over the area both historically and culturally. Missing these three archaeological gems will leave a hole in your historical knowledge of the Maya. Being small sites, Sayil, Labna, Kabáh are easy to tour in just a few hours. Located close to Uxmal, they are easy to get to.

The Suburbs of Uxmal in the Yucatan

Sayil, Labna, Kabáh were settled at different times, but their monumental architecture was constructed between the end of the 8th and the middle of the 10th centuries. Each location shares architectural similarities which points to their relationship to one another and Uxmal. Discovered by the Stephens and Catherwood team, t was Stephens that called three settlements suburbs and in some cases referred to each individual site as ‘neighborhoods’.

Sayil, Labna, Kabáh are thought to be the forgotten cities, living in the shadows of Uxaml. Uxmal is the highlighted attraction in the area due to its size, architectural features and role in the Spanish invasion. But Sayil, Labna, Kabáh are not forgotten. Each site is an architectural marvel that build upon a visitors knowledge and appreciation of this indigenous community.

Throughout all the sites, there are building details and repeated references to the Rain God Chac. It is assumed by archeologists that the numerous representations of this deity is directly related to the absence of a local water source, neither cenotes, rivers nor lagoons. 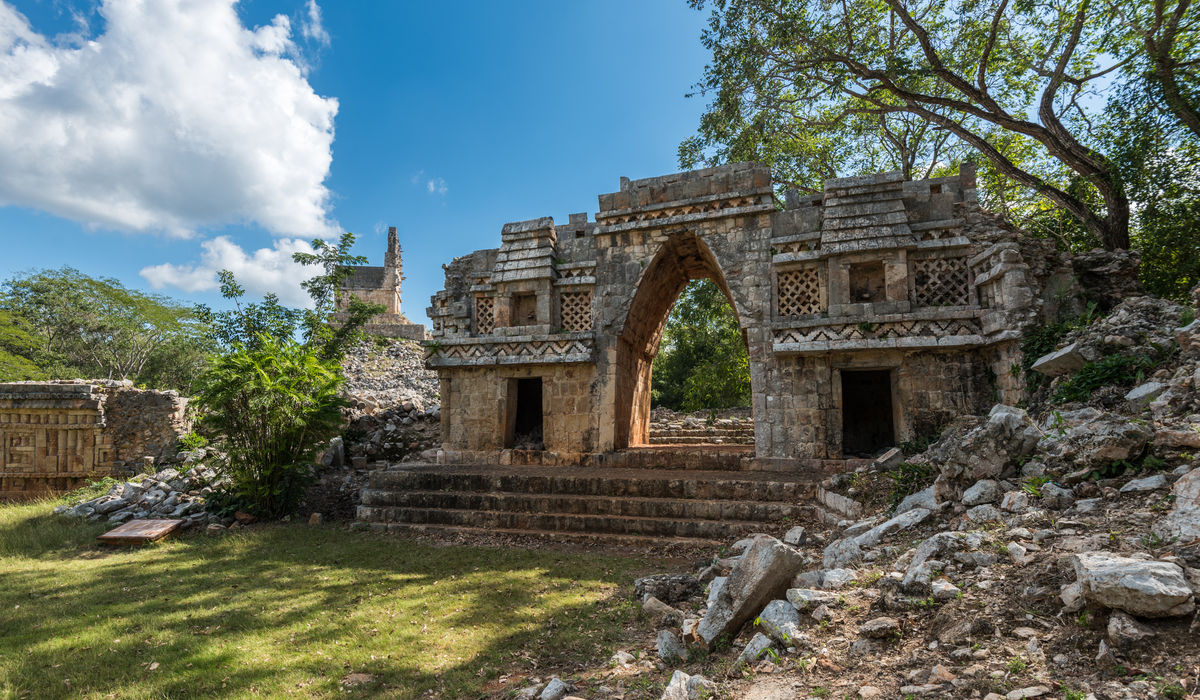 It is speculated that Kabáh may have been as large as Uxmal and its political equal. It was inhabited by 250 BC. with the buildings erected between 600 to 1000 AD. It was abandoned a few centuries before the Spanish Conquest, but a specific date and reason is unknown. This site is more ornamental in its architectural features then its neighbors, which is why this theory is still thrown around to this day.

Features of the settlement include rain capture and water distribution systems, the greatest free standing archway that is uncharacteristic of this region, and the ornate building of Codz Poop. An 18 kms/ 12 miles sacbe connects Uxmal and Kabáh.

When we last visited Kabáh, archeologists and trabajadores were working on the facade of the Codz Poop building. The entire building is covered from top to bottom, end to end in stucco Chac Masks, the Mayan Rain God. The detail and labor put into each piece is astounding and atypical of this community. Watching the reconstruction of the Codz Poop, from the numbered pieces on the ground to the actual placement on the outer walls, was an honor. This project will not be finished any time soon so when you visit, we suspect you too can witness this feat of history. It started in 2003 and in 2015 it was still in process.

Kabáh is the more ornamental and larger of the three sites which has led historians to believe its greater influence. To understand Uxmal it is important to also understand Kabáh and vice versa. It was declared a Yucatan National Park in 1993.

Labna Highlights – The Neighbor to Sayil and Kabáh

Labna dates between 600-900 A.D. It is the second largest site of these three sites with a lot of detail in the remaining buildings. 300 square meters is open to public, making this an easy site to explore.
Points of interest are the Palace Group, EL Mirador, Central Plaza, various sac bes and the archway. The Palace Group is the first structure as you enter the site. This is a complex structure with an incredible amount of architectural highlights.

You can investigate the hidden stairway and admire corner stone carvings making this an intimate ruin site. Walk from the Palace along the sac be to the archway. The archway is the first to be used not just as a passageway but a decorative architectural feature. The surrounding buildings that were a part of the archway no longer exist but investigations can prove that the archway was a part of a larger, more complex structure.

We will admit, we had no idea what we were walking into when we pulled in the Sayil site. As we walked from the entrance through the jungle to the first clearing, in our wildest dreams we could not have imagined the structure that was before us. The Great Palace, thought to be residences for local Royal families, was a site. It is composed of three separate levels, and building features are unlike other Puuc structures in the area. This structure dominates the site.

The other remaining structure open to the public is the south palace. This is not as grand as the first palace but again, an insight into this royal neighborhood.

Getting to Sayil, Labna, Kabáh

If you are starting out at Uxmal in the Yucatan, it is best to visit the locations in this order; Kabáh, Sayil and finally Labna. Kabáh is located on Hwy 261 just 12 miles/20 kms south of Uxmal. Further to the southeast is Sayil. The remote road that leads to Sayil is clearly marked. Further to the east on the same ‘unmarked road’ is Labna. This is the same road that leads to the Eco Chocolate Museum, a stop well worth taking.