We love this ruin site! Muyil is the modern name used to refer to this archaeological site, but it is also know as Chunyaxché. This site is located within the northwest boundaries of the Sian Ka’an Biosphere Reserve off Hwy 307. Muyil Ruins is small, lush, has few visitors, and feels magical. This is an easy site to navigate, fun site to walk through, and the lagoon adds a new dimension to this Mayan history lesson.

Muyil is the most notable of the 22 pre-Hispanic settlements of the Sian Ka’an and is situated 12 kilometers inland from the Caribbean shoreline and approximately 25 kilometers (9.3 miles) south of Tulum Pueblo on Highway 307.

This is an additional coastal Maya ruin site, Tulum and Xel-Ha being the other Mayan settlements located on the Riviera Maya coast. There are two archeological sites in Muyil, but only one is open to the public. If you have research Muyil at length before you visit, archeologists refer to the public site as Muyil A and the private site as Muyil B. 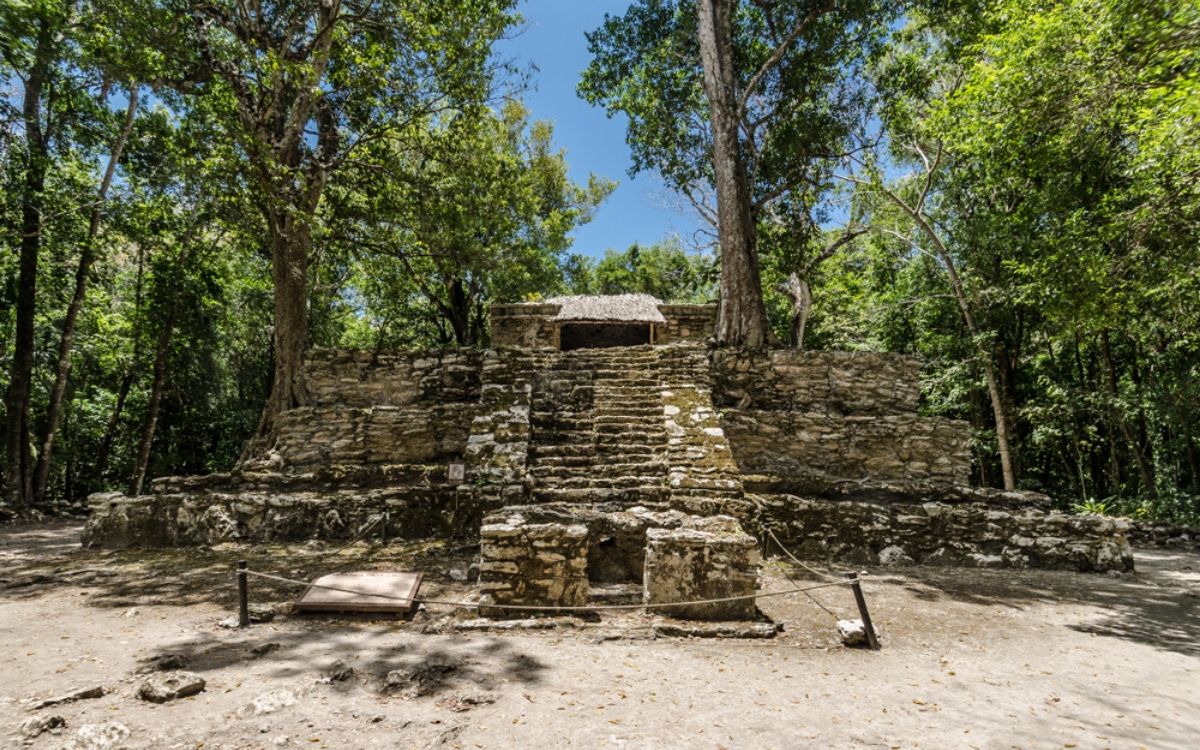 A Little History About Muyil

Muyil was a densely populated settlement during the pre-Hispanic era. Buildings were mainly of a civic-religious and residential nature and showcase the Peten architectural style. The site’s proximity to Muyil Lagoon made it an important maritime trade route, with relations to Coba well documented. Visitors can travel through the lagoons of Muyil and Chunyaxche including the ancient canal system dredged by the Maya that access the Caribbean Sea through Laguna Campechen and Boca Paila.

Muyil seems to have been settled around 300 B.C., centuries before Chichen Itza, Uxmal and Tulum. It remained as a settlement up until the time of the Spanish invasion in the 16th Century where people either fled from the Spanish out of fear or were killed from diseases spread by the Spanish.

What We Love About Muyil Ruins

Our two favorite areas in the Muyil Ruins are Building 8 located deep in the jungle to the north and the boardwalk that takes you into the Sian Kaan. It takes about 60 minutes to walk through the site, but we stopped and paused at both Building 8 and along the boardwalk to take in the full effect of this archaeological site. Muyil needs to be experienced, not read about, to truly appreciate this site.

Update 2015 – We still love, love, love these ruins! One change during your visit is the new entrance fee required to enter the Sian Ka’an portion of the site. This area is where you access the viewing tower and the lagoon. Cost is 50 pesos and you will receive a ticket once you pay. You pay either at the small palapa located at the entrance to the board walk, or you may be asked by the caretaker as you walk along the boardwalk. The caretaker frequently walks around either sweeping the board walk or attending to plants.