El Meco, a small but influential Mayan Archaeological site located in Cancun, was just recently opened to the public. The site is well preserved and worth a visit before heading to Cancun beaches or hopping on the Isla Mujeres ferry. The Itzamna influence is evident in this location. Serpent heads decorate the castillo staircase, the highest Mayan pyramid in the Cancun area. 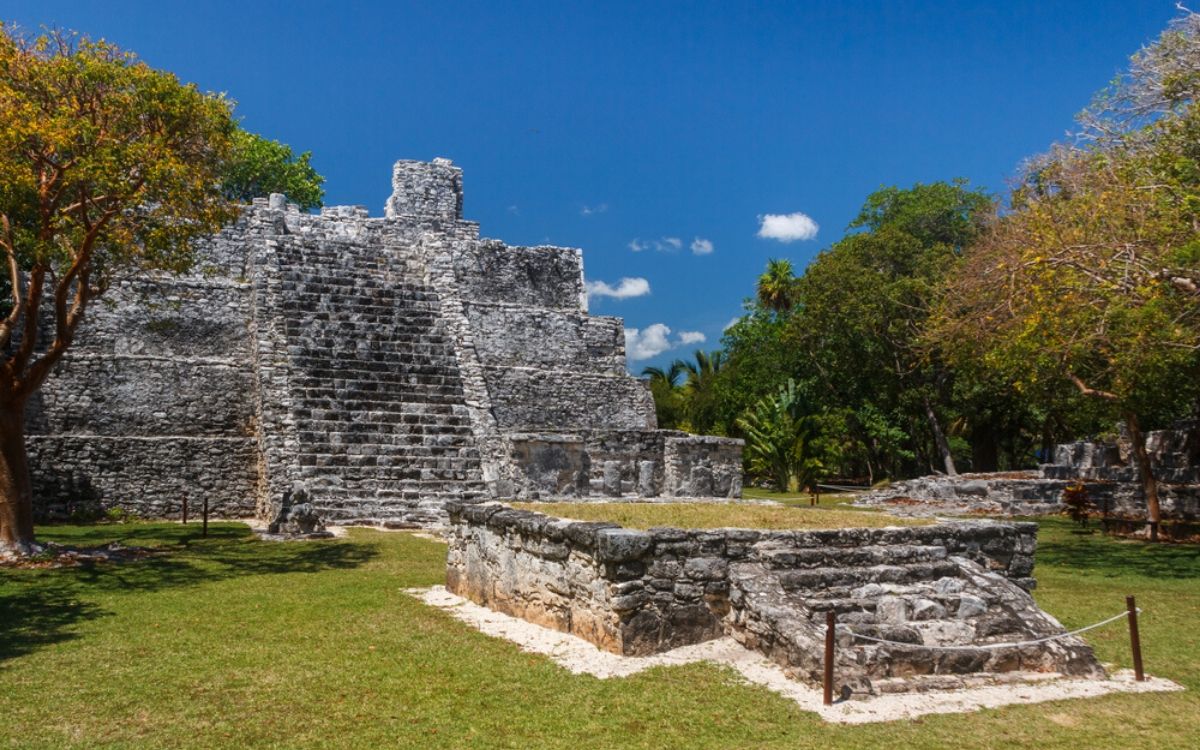 The Influence of Chichen Itza is Evident

El Meco is located to the north of Cancun en route to Punta Sam and Puerto Juarez. It has the highest archaeological structure in the northern peninsula (12m/40ft) which supports archaeological findings that this location was used for maritime navigation. From the top of the Castillo one can see the Caribbean Sea, all of Cancun’s lagoons, and Isla Mujeres. It is thought to be the lighthouse of the region.

El Meco had two community risings. Archaeologists believe that this small city was first inhabited in 200 AD and subsequently abandoned around 600 AD. It was during this time the community served as an important civil and ceremonial center. It depended on Coba for survival.

The second rising and period of prosperity was during the post classic period. Archaeologists see architectural highlights that resonate with Chichen Itza and the Itzamna. At the foot of the eastern facing steps of the Castillo are two well-preserved serpent heads, similar to that found at Chichen Itza. It was also during this time that nearby settlements, San Miguelito and El Rey worked with El Meco to further develop the Maya inland and sea trade networks. It is assumed the settlement was abandoned upon the arrival of the Spanish but the actual history is unknown.

The most important and impressive structure is the Castillo, with its serpent heads, a small temple at the base and the view of the sea and surrounding lagoons.

What We Love About El Meco

We loved seeking out El Meco in the northern part of Cancun. Off the beaten track and with few signs to indicate where the actual Mayan ruin site is located, we explored parts of Cancun we had never seen. Expecting a small site like that of El Rey and San Miguelito, we were pleasantly surprised by the height of the Castillo. In the temple beside the base of the Castillo we did find evidence that further excavation is taking place on this site where we found carvings laid out meticulously on the floor. We also loved that the site has incredible trees. Thankfully this means lots of shade, but it also shows how long this site has been ‘in ruins’ and untouched.

Getting to El Meco

We drove to El Meco taking Av. Bonampak to Av. Portillo Lopez. Turn right into Puerto Juarez, and then turn right when you reach the Port entrance. On your right hand side is a large sign, albeit covered in vegetation, for El Meco. When you are finished at the ruins, take a break at the small restaurants that overlook the water. Stop for lunch and enjoy an authentic seafood taco or ceviche outside of the Hotel Zone.

If you are using public transportation to get to Cancun, hop in a taxi at the ADO bus station. To return to the center of Cancun, combis (public vans) frequent Av. Portillo Lopez.