The Glory Of Ek Balam and Its Famous El Torre

Ek Balam is a Yucatec Maya name that translates to “the black jaguar” or “bright star jaguar.” Located near the colonial city of Valladolid in Yucatan, Mexico, Ek Balam’s most important cultural period was during the Late Classic Period 700 – 1000 A.D It wasn’t until the late 1980’s when the site was mapped, and research continued into the 1990’s. This is a mesmerizing ruins site if you are looking for something a bit off the beaten path.

Ek Balam was in operation for over 1000 years. Construction started in the late Pre-Classic Period (100 B.C. to 300 A.D.) and continued well into Late Classic Period, 700 to 900 A.D. Speculation suggestions that the city may even have been inhabited as late as the Spanish invasion in the 16th Century. 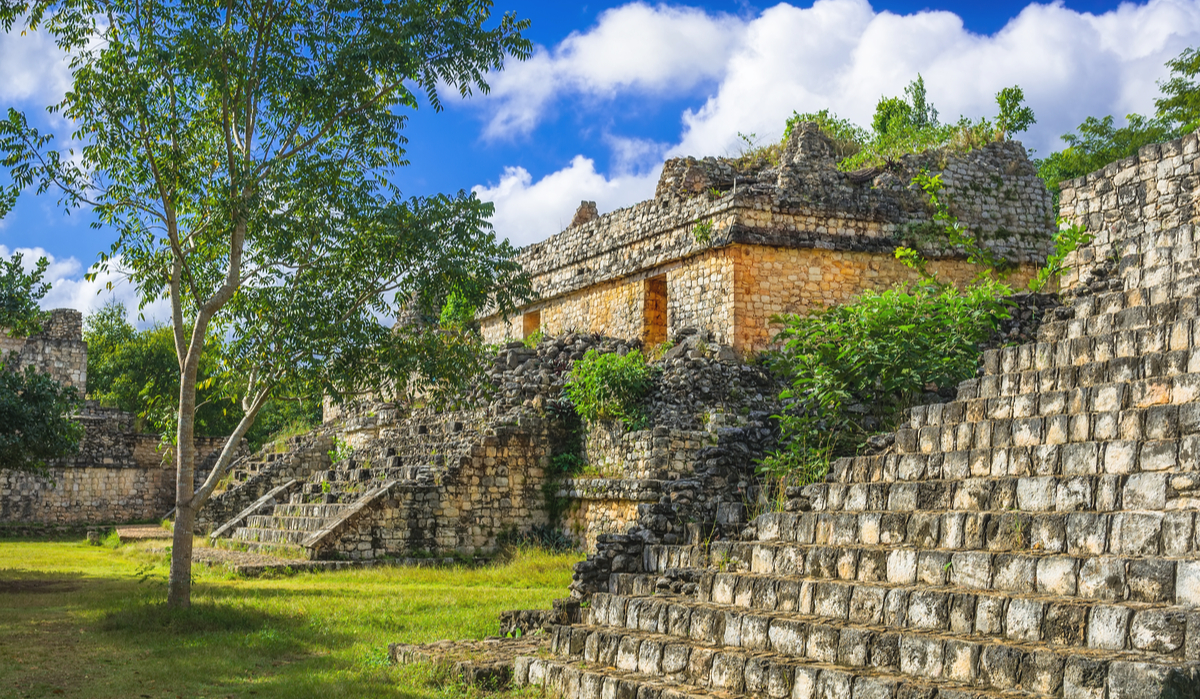 Ek Balam is located 51 kilometers (32 mi) Northeast of Chichen Itza.
Only the center of Ek’ Balam has been excavated.
The entire settlement covered about 12 square kilometers but only 1 square mile can be viewed.
Ek Balam was at its peak from 770 to 840 CE.
45 structures on the site have been mapped.
The site is surrounded by two defense walls and the interior city has a multitude of smaller walls.
Buildings were designed in the northern Petén architectural style.
Ek Balam is composed of several temples, two palaces and a large pyramid (El Torre) which is located in the center of the city.

The enormous dimensions of the buildings, highly decorated facades, and constructed walls surrounding the center of this Mayan city are what defines this ruin. The most important structures are found within the Central and South Plazas, walled enclosures that are less than one square kilometer but the site itself is quite large. Five entrances and five sac bes (roads) lead into the Central Plaza through the defense walls and match the direction of the four cardinal points. The brilliance of the Maya shines through on this site.

It is the architecture and design of El Torre, The Tower, one of the largest Mayan structures in the Yucatan, that amazed archaeologists. The Tower measures over 500ft/151m long, 200ft/60m wide and reaches 100ft/30m high and is home to some of the most decorate and intricate design motifs found in the Yucatan.

A note about construction at Ek Balam: The decoration of Ek Balam’s building facades were not carved stone, like those found in Uxmal and Chichen Itza. Builders and artists used stucco and limestone mortar, a pliable material that could be modeled into distinct forms and painted over. The only decorative carved stone elements are the small hoops found in the corner of the buildings.

The Tower – El Torre in the Central Plaza

The most impressive and noticeable structure in Ek Balam is El Torre, the main tower located in the Central Plaza. Measuring at 500ft/151m long, 200ft/60m wide and 100/30 meters high.

The significant construction difference at Ek Balam is the use of multiple layers and decorated facades found on El Torre. The facades are protected by palapa roofs and conserve some of the greatest Mayan artistry found at Ek Balam.

The Tower houses the tomb of Ek Balam’s powerful ruler Ukil-Kan-Lek-Tok the highest official during the city’s peak in 800 A.D. There are full figure statues decorating the tomb that exhibit great detail. Hair braids, loin cloth patterns, and skulls carved into the belts of warriors can be seen on the statues that protect the Tomb. In some places you can view wall paintings and murals that remain. 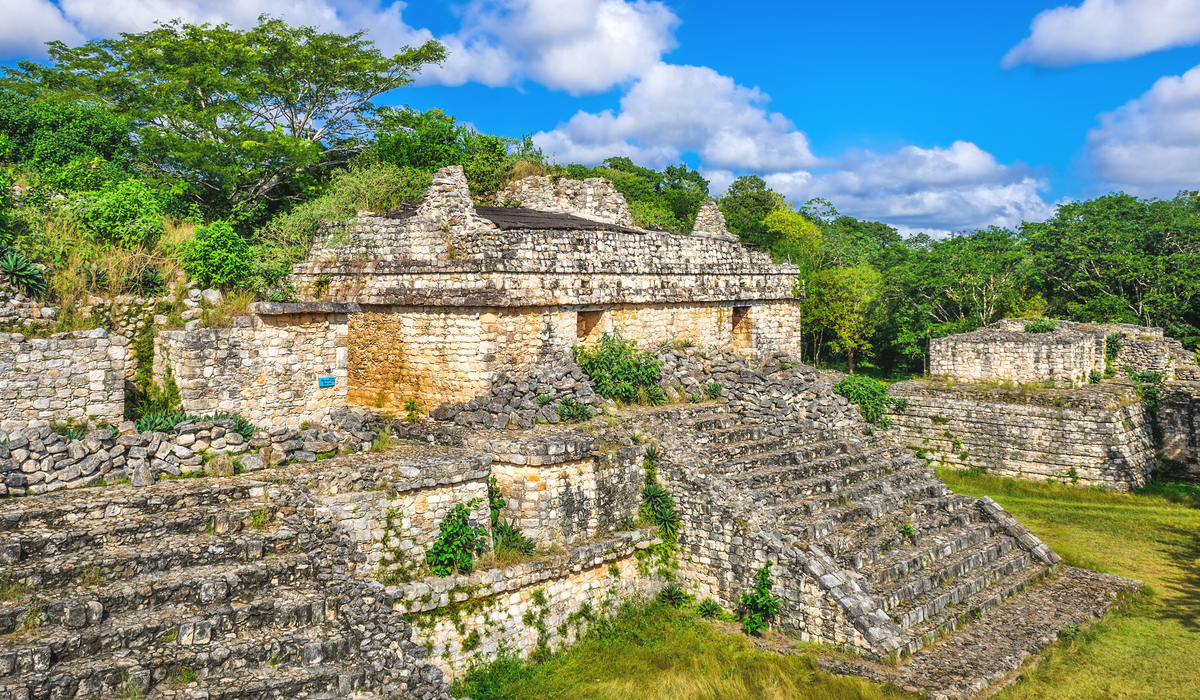 Structure 17 in the South Plaza

To the West of the South Plaza is Structure 17, what we call “the twins”. This building represents well conserved architectural designs. The large foundation is 40 meters in length, 17 meters wide and 6 meters high and holds two buildings.

Structure 10 is a larger Mayan Structure, measuring 43 meters in length, 30 meters wide and 5 meters high. It is often associated with and compared to the “miniature temples” located in the east coast of Quintana Roo. Although the base corresponds to the Late Classic (700 – 1000 A.D.), the upper structures were not built until the Post Classic Period.

Archaeologists are stumped by the height of the city walls located around the Central Plaza and throughout the South Plaza. These walls are not high enough to provide protection or be used for defense purposes. It is thought that the walls were built for ceremonial activities but exactly what ceremonies are undetermined. Another ceremonial feature, which is common in most Mayan settlements, is the ball court, where the important Mayan ball game was held.

What We Love About the Ek Balam Ruins

The intricate artistic detail and symbolism incorporated into the facades and sculptures decorating El Torre leave us in awe every time we visit. Ek Balam is an easy day trip from the Riviera Maya and can be combined with other activities. You can head to Valladolid after your visit, a beautiful colonial city just 20 minutes from this Mayan ruin, or head north to the Gulf of Mexico and check out Rio Lagartos. Whichever plan you choose, make sure you stop at the small pueblo of Temonzon, home of the best smoked meat in the area. The short ribs are like nothing you have ever tasted. The owners are happy to have you step into the back court yard and see how they smoke their meats, but the recipe is never shared!

Getting to Ek Balam

Ek Balam archaeological zone is roughly a 2 hour drive from the Riviera Maya and 40 kilometers north of Valladolid on the road to Tizamin and Rio Lagartos. If you are in a hurry take the toll road from Cancun and exit at Valladolid. Our favorite route is through Tulum, along the Coba Road and then on to Valladolid. Follow the signs to Rio Lagartos once you arrive close to Valladolid.

Update 2015 – Include the Playa del Carmen toll road to your drive and you will cut this road trip in half. We also recommend stopping by the restaurant Dolce Mente for an after-ruin lunch. Call them at 986 106 8086. It is best to let the restaurant know in advance that you would like to join them for lunch. Italian food, organic produce in the heart of the Ek Balam village. Also note that Ek’ Balam has also imposed the state tax for ruin visitors. One payment is for the INAH entrance fee, another payment at a separate window is a state tax fee. Both tickets are required for entrance into the ruins.

The site is open from 8 AM to 5 PM and is becoming more popular with local tour groups. Ticketing is similar to Uxmal where you pay a split fee, one for the site and one for the Yucatan state government. You will need both tickets to enter the grounds.