Dzibilchaltun Ruins are located near the colonial city of Merida, Yucatan. Dzibilchaltun was a large settlement and still occupied when the Spanish arrived during the 1500s. Archaeologists estimate there were as many as 200,000 inhabitants and 8,400 buildings during its history with artifacts dating back to the middle of the classic period (700 – 800 A.D.) Highlights are the large plaza, sacbe trails, the Temple of the Dolls, and the Open Chapel, an unusual amphitheater shaped structure.

Dzibilchaltun, a modern Mayan name meaning “writing on flat stones,” doesn’t have huge pyramids like Chichen Itza or Uxmal, but it does have its own unique features that make it a worthwhile site to visit. It was once a wealthy port and center of Mayan coastal trade with a peak population of about 200,000. The population declined as Chichen Itza rose to power. The Maya lived here from 300 B.C. to the time of the Spanish invasions. The Spanish continued to build in the city once they arrived and visitors can see the Franciscan chapel that lies in the middle of the Mayan ruins. Restoration continues at Dzibilchaltun with over 35 square kilometers investigated by international archaeologists. 8,000 structures have been identified but only a small portion excavated. Due to the long history of this particular site and the various influences from both Maya and Spanish communities, INAH has added an on-site museum on some of the great architectural features of the buildings and artifacts.

Temple of the Dolls

Templo de las Siete Muñecas, the Temple of the Dolls, is an impressive building on a pyramid base with one short tower on its roof and a stelae in front of the building. The temple was discovered by archaeologists in the 1950s under the ruins of a larger pyramid which was constructed on top of The Temple of the Dolls. Building temples on top of temples was a common practice with the Maya. The dolls were found in the buried temple, but are now housed in the museum to protect and preserve these architectural features. Though the dolls have been moved, the ingenuity of this building remains. The Temple of the Dolls and its temple doorways were constructed in a specific and deliberate direction that confirms the Maya understanding of the solar system. During the Spring and Autumn equinox, the sun’s rays pass through the doorways of the temples. Since corn remained a major part of the Maya diet, this event had great significance to the Maya as it represented the beginning and end of harvest season honoring Yum Kax, the Maya god of corn. The site is opened at 5:30 A.M. on those two days so visitors can view the phenomenon.

A sacbe (roadway) leading from the Temple of the Seven Dolls connects to the central plaza and an unusual arched structure called the Open Chapel. When the Spanish arrived in the 16th Century, they dismantled some of the buildings in this settlement and used the stone to construct their own buildings, including this 16th Century Franciscan church that now lies in ruins on the site. This is the only Mayan ruin we know of that has Spanish buildings co-existing with Mayan structures.

Cenote Xlakah is a beautiful freshwater pool located to the side of the main plaza. It was the city’s freshwater source and perhaps the main reason the Maya chose this location to build their settlement. Water from Cenote Xlakah would have been perfect for residential drinking water and irrigation of their fields.

Under the surface, Cenote Xlakah reaches depths of 44 meters (144 feet). According to the plaque near the water’s edge, Xlakah means “old town” in Maya. The cenote was first explored from 1957-59 when thousands of pottery shards and urns were found in the water along with wood, stone and bone artifacts. The earthenware dates to the Late Classic Periods of 600-1000 A.D.

Visitors to Dzibilchaltun can swim in the cenote during their tour. Bring your bathing suit so you can take advantage of the cool fresh water. 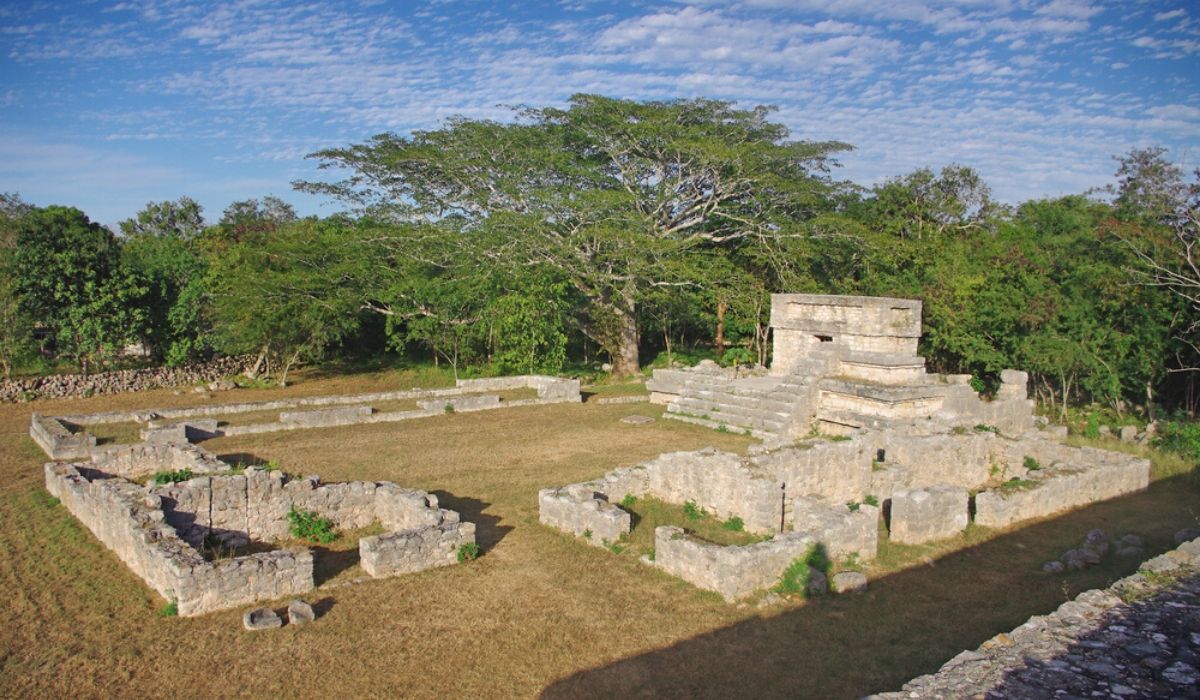 The air conditioned museum at Dzibilchaltun is full of interesting artifacts of both Mayan and Spanish origin. Carved stone tablets, stelae, and the original carved dolls are displayed alongside Maya hupiles, old textile machinery, maps, Spanish armor, swords and other weapons. The museum is located by the entrance to the ruins site and is definitely worth seeing during your stay. The air conditioning can be a relief during a hot day.

What we Love About the Dzibilchaltun Ruins

We are fascinated by the Temple of the Seven Dolls and intrigued with the long history of Dzibilchaltun. This is the first ruin we have visited that has a combined history of both Maya and Spanish residents. The museum was a great addition to our tour and we love the fact that it has air conditioning.

Dzibilchaltun is only 9 miles from Merida. Merida taxi drivers would be happy to take you to this site or you can hop on public transportation to the site. Combi vans (collectivos) can be found on Calle 69 between 62 and 64 in San Juan Park, Merida. These vans go directly to Dzibilchaltun.

If you’d rather drive, take the Merida/Progreso highway north for 7 miles, watching the signs as you go. You will end up taking two right hand turns as you make your way to the ruins.