Climb the Pyramid at Coba

Archaeologists believe Cobá was one of the most important ruin sites on the Yucatan Peninsula. The design and purpose of this settlement was very different from other Mayan cities, with various settlements existing in one area. The white roads lead from each settlement to the main pyramid, Nohoch Mul. Learn more about this off-the-beaten-track Mayan Ruin.

A Little History About The Coba Ruins

Coba means ‘waters stirred by the wind’, an appropriate Mayan name as this settlement is surrounded by two large lagoons. For many years Coba was an ignored piece of Mayan history due to its location. Located between Tulum in the state of Quintana Roo, and Valladolid in the state of Yucatan, archeologists first learned about the site in the mid 1800’s, but dense jungle, the Caste War and lack of funds made this site a difficult area to penetrate. This Mayan site is still largely unexcavated making it a true wonder in the Yucatan. Visitors can enjoy shaded walkways that are the original sacbe (white roads), three settlements that show the architecture and vast area of this once large city, 2 ball courts and climb the highest Mayan pyramid in the Yucatan, Nohoch Mul. We have been visiting Coba since our arrival to the area in the early 90’s and we are still fascinated by this settlement.

Cobá was finally opened to the public as an archeological site in1973. Archeologists have estimated that 6,000 structures exist, but only three settlements are for public viewing. what makes this site different from Chichen Itza, Ek Balam, or even Tulum is that Coba is not a single site but a large group of sites connected to the central pyramid, connected by over 16 Mayan ceremonial “white roads” (sacbéob). The three main areas that can be viewed in the Coba Ruins are the Nohoch Mul structures (main pyramid), Conjunto Pinturas (spiritual area) and Macanxoc structures (close to the lagoon that bears the same name). Your day at Coba can last up to 2.5 hours if you walk the site, 1.5 hours if you take advantage of the Coba bicycle rentals or in an hour if you opt for the Mayan limo, a chauffeured tricycle where you just sit and take in the sights. Both bicycle options are inexpensive and super fun! 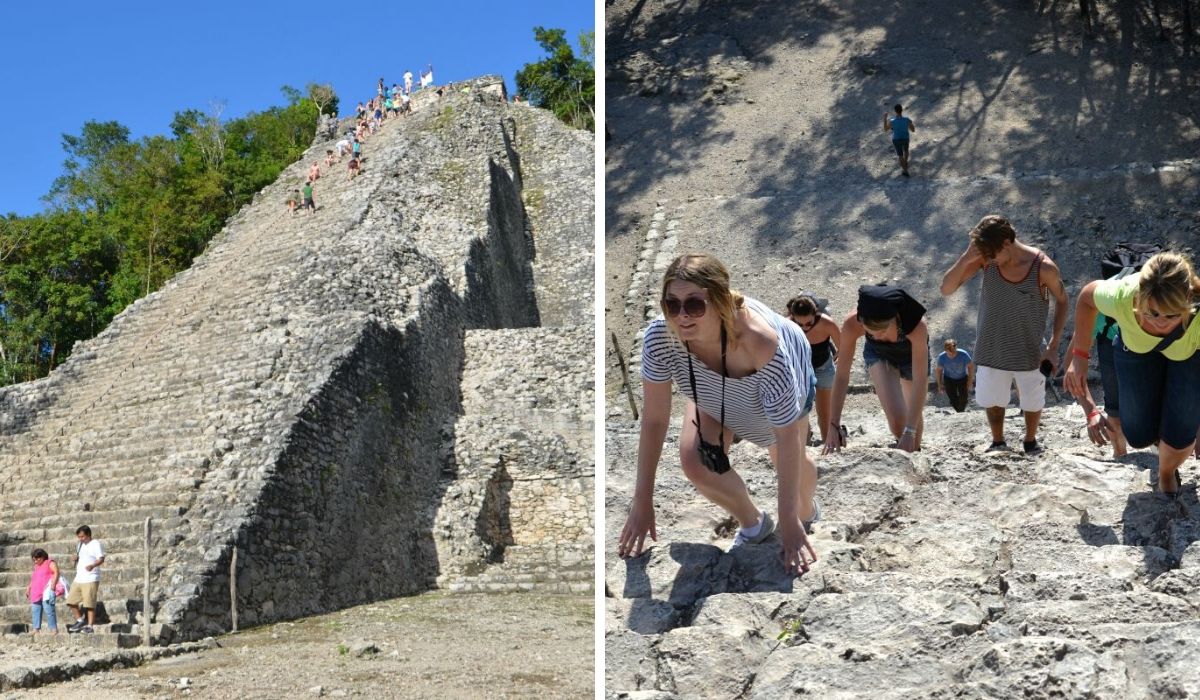 Fast Facts About the Coba Ruins

Making Your Way Through the Coba Ruins

We have outlined the important artifacts and structures that can be viewed and experienced within the ruins of Coba. We love every aspect of this ruin and hope you enjoy our explanations of these significant areas and structures.

We always save the best for last, and encourage you to do the same. The main structure and most popular activity at Coba, Nohoch Mul (meaning large hill), is climbing the 42 meters tall (137 feet) pyramid. Be prepared for a 120 steps that lead to an remarkable view of the Yucatan and non-public areas of Coba including both lagoons; Macanxoc Lagoon to the east and Cobá Lagoon to the southwest.

The Coba Group is a series of structures close to the entrance that include the Iglesia (the Church) and one of two ball courts located in this site. Check out the height of a small passage way that is located near the iglesia. Though the iglesia can not be climbed at this time, it does provide a wonderful view of the Macamxoc Lagoon.

The focus of this area is the Pyramid of the Painted Lintel where visitors can see from afar actual paintings on the top temple.

Past the Conjunto de Pinturas is the Macanxoc Group that is found following one of the Sacbes. This area has 8 stelaes and numerous altars. The vast number of stelaes shows that this area was of spiritual significance to the area.

There are a large number of stelae, large stone slabs, throughout the Coba site displayed under thatched. The stelae contain drawings and glyphs that document major events and historical facts that happened in the city of Coba. This is what archeologists use to decipher the history and movements of the Mayan culture throughout the area. Today the glyphs are nearly illegible but the history radiates from these important artifacts.

Sacbe – The Importance of the White road

Cobá was an urban hub of many settlements that were joined by roads called sacbes, a very unique feature to this Mayan city. As you walk through Coba, you will be traveling on the same roads of the Maya centuries before. These roads, ranging in width from 10 feet to 30 feet, were constructed by the Maya for commerce. About fifty sacbes have been discovered within the grounds of Coba; with one sacbe reaching 62kms/100km. The effort required to build these wide and long paths exceeded that of stone buildings and temples.

The transportation of goods along the sacbes was done by people carrying parcels during the cooler temperatures at night. The white limestone would illuminate from the moonlight and essentially provide “lights” for travelers to see. Archeologists are stumped by how the Mayans transported their goods, which was on foot, not by wheeled vehicles. Historians have documented that the Maya did not use the wheel or wheeled vehicles to transport their goods on these roads, though they were aware that the wheel existed.

Whether you rent a car, take public transportation or join a group, this is an easy day trip from the Riviera Maya.

Coba is best accessed from the Riviera Maya through Tulum taking the famous Coba road found at the first intersection in Tulum. Clear signage is posted for drivers. Travel west (away from the beach) and go about 30 minutes, taking extra precaution at small villages that are known for their speed bumps, to the ruins. Note the road signs at the roundabout just before you reach the village and ruins. Food and lodging can be found near the ruins and we encourage you to try some of the authentic Yucatecan food that cannot be found in the Riviera Maya! That in itself is worth the visit to Coba.

Check out other Maya ruins that you can explore in the area.