See Guatemala From the Top of This Pyramid

Located in Campeche, Mexico, Calakmul is only 22 miles from the Guatemala border. Located within a protected UNESCO Biosphere and a UNESCO site itself, Calakmul has vast jungle, monkeys, and over 230 species of birds. Remote and beautiful, the Calakmul Ruins is a unique settlement that deserved it’s award for its cultural and environmental importance.

In Maya, ca means “two”, lak means “adjacent”, and mul signifies any artificial mound or pyramid, so Calakmul is the “City of the Two Adjacent Pyramids”. In ancient times, the city core was known as Ox Te’ Tuun, meaning “Three Stones”. The city existed for twelve centuries from (550 B.C. – 900 A.D.).

Calakmul’s southern location in the state of Quintana Roo places it in the center of the Peten Mayan Region. The inhabitants were influenced from both the north and south and belonged to a coalition that included the Maya settlements of El Mirador, Nakbé, and Uaxactún in the Maya lowlands. Calakmul was the largest and most powerful settlement in the coalition. This alliance was in constant conflict with its southern neighbors, especially Tikal located across the contemporary border of Guatemala.

During its heyday in the Classic Period 500 A.D. to 800 A.D., Calkmul was a powerhouse, with over 50,000 inhabitants, 6700 structures and various sacbes for commerce. The entire site is over 70 square kilometers (27 sq mi), though only a portion is open to the public. It is thought that the governing body of Calamkul had direct influence over settlements located up to 150 kms away, growing its direct impact from 50,000 inhabitants to over 200,000. If additional outer lying areas are included, Calakmul influenced over 1.5 million people. How the settlement was structured and built feels similar to Coba in the Yucatan, with a main plaza that led to various secondary urban centers. Its influence stood over 12 centuries and is thought to have more structures than any other excavated Maya settlements in the region. 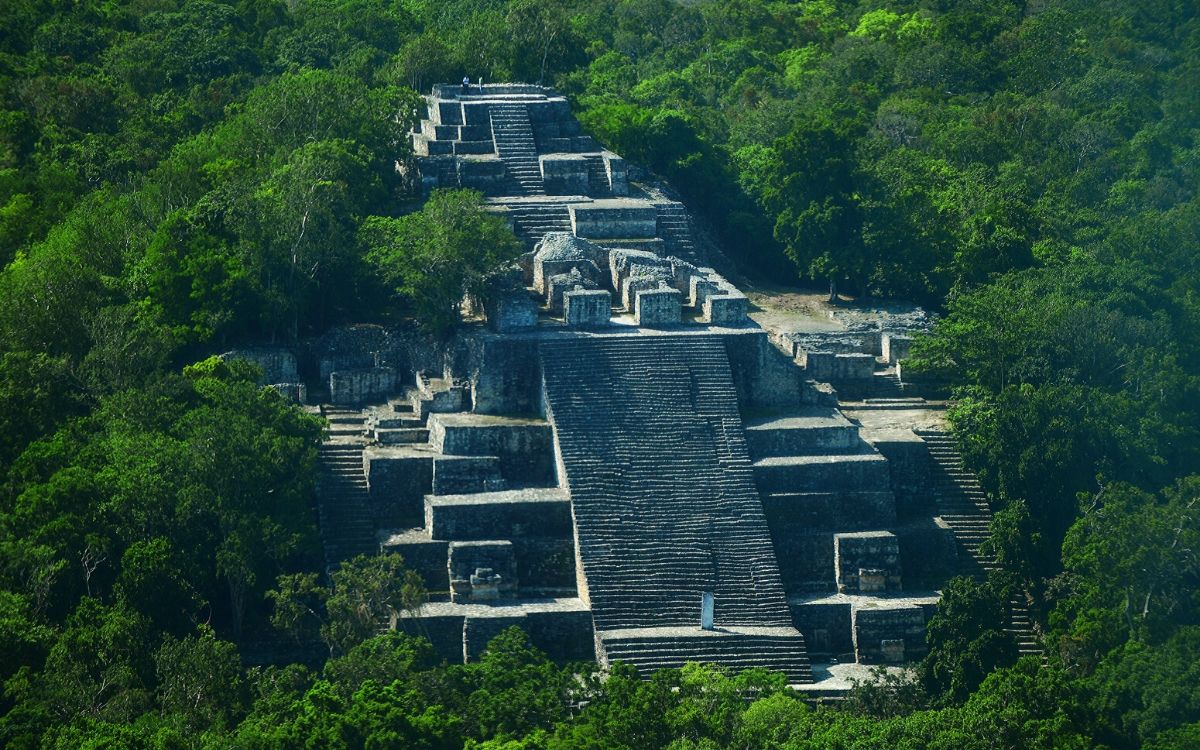 There are an incredible amount of things to see while visiting Calakmul as it is one of the most structurally rich Mayan sites. The 117 stelae are just one high point of this settlement. The largest water reservoirs are on this site, over 8 sacbes can be walked to various structures, and one of the highest pyramids in the region is the main pyramid standing at 148 feet! The views are amazing over the biosphere!

Calakmul is an architectural sequence with figures sculpted in stone and modeled in plaster. The largest structures and urban plan for Calakmul were constructed toward the end of the Middle Pre-classic period (550 B.C. – 300 B.C.). During the 5th Century, Calakmul started extensive remodeling. Among these works is the noteworthy remodeling of the great foundation of Structure II. It is likely that toward the end of the Late Classic period (600-800 A.D.), Calakmul experienced its greatest prosperity and initiated yet another series of renovations and installation of public works which changed the city’s image. During this time the renovations focused on the construction of monuments, known as smooth stelae (or estelas lisas), and erected in the Great Plaza. 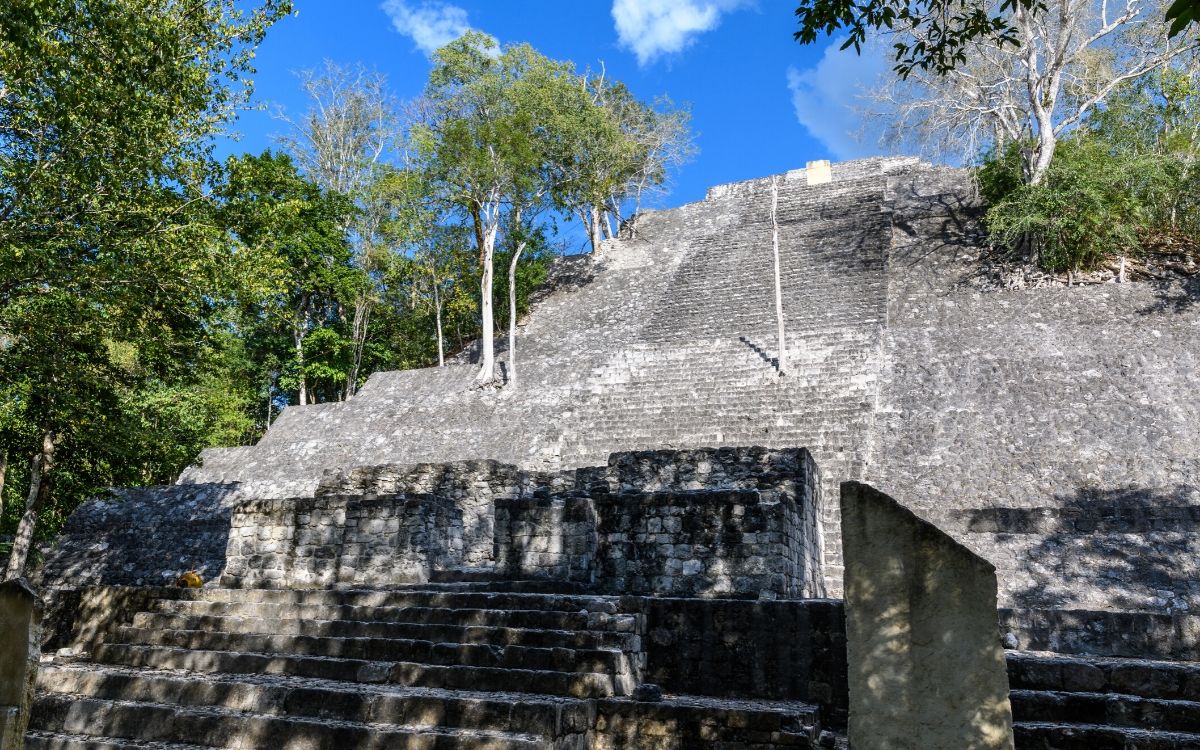 Urban design – The core of Calakmul covers 2 square kilometers (0.77 sq mi), an area that contains the remains of roughly 1000 structures. The periphery was occupied by smaller residential structures beyond the site core covers an area of more than 20 square kilometers (7.7 sq mi). Archaeologists have mapped approximately 6250 structures but only the core area structures are open to the public. Calakmul matches Tikal in size and estimated population, but appears to have greater density.

Reservoirs and Water – The site is surrounded by an extensive network of canals and reservoirs. There are five major reservoirs, including the largest example in the Maya world, measuring 242 by 212 meters (794 by 696 ft) that was a filled, small river during the rainy season.

Sacbes – Eight sacbe (causeways) have been located around Calakmul. Two of these have been mapped, three have been identified visually on the ground and three more identified with remote sensing. The sacbes not only linked Calakmul with local suburban sites but also with more distant allies and rivals, such as the great cities of El Mirador, El Tintal and Nakbe. The longest documented roadway links Calakmul with El Mirador first (38.25 kilometres (23.77 mi) to the southwest) and ends at El Tintal making this sacbe 68.25 kilometers (42.77 mi).

Structure 1 (or Structure I) is located to the east of the plaza center. A number of stelae were erected at its base by the Ruler Yuknoom Took’ K’awiil in 731. Because it was built on a low hill, Structure 1 appears to be higher than Structure 2, although this is not the case.

Structure 2 (or Structure II) is a north-facing pyramid that is the largest in in the Maya world. The base measures 120 meters (390 ft) square and it stands over 45 meters (148 ft) high. The construction of this pyramid is similar to other pyramids, where there are multiple construction on top of each other, enabling incredible heights. The core of the building (Structure 2A) is a triadic pyramid dating to the Late Pre-classic Period. An extension was added to the front of the pyramid in the Early Classic Period which covered an earlier building on the north side and made up a series of shrines. Structure 2B was the central shrine, 2C was the east shrine and 2D the west shrine. The facade was decorated with six large masks set between the stairways, three arranged vertically on each side.

Why We Love Calakmul

This ruin site is impressive and can immerse you for days in Mayan history. Similar to Coba, this Mayan city was an influencing site, known as the powerhouse in the Mayan lowlands. Our quick overview is just that, an overview of this archeological site that houses a biosphere, 5 large waterways and lagoons, and various murals, stelae, pyramids and more. Take your time here and investigate more than just the ruins of Calakmul. We found it helpful to bring a map, either downloaded to your smart phone or tablet for reference. The site is large, which we love, but many visitors find it a challenge to navigate through the site due to its complexity. This is a full day. The drive in, the museum, and the walk around the ruins make this a long but blissful day.

This is a Loco Gringo favored destination in the southern region. Not only do we love the Mayan ruin, but the surrounding area. Our last visit was in 2015 and we still love this site!

From the Riviera Maya and Costa Maya, Calakmul can be accessed going south on Hwy 307 to Chetumal and then west on Hwy 186, the Chetumal-Escarcega highway. We recommend an overnight close to the ruins so you can get an early start into the ruin site. The drive to the entrance is a long and and naroow paved road so allow yourself some time to get to the entrance. On a recent visit in 2015 the drive took 90 minutes to complete. Note: There are a few entrance fees when you go to Calakmul. At the entrance to the Biosphere you are to pay for your vehicle and each passenger. For two people the cost was under 10 USD/130 pesos. As you approach the museum half way to the site, you will be asked to pay an additional fee for the road 4usd/60 pesos. The entrance to the ruin site requires the INAH fee of 4usd/56pesos per person. This might seem confusing but with the ruins located in the Biosphere there are different fees that you are not required to pay at INAH sites. Bring pesos for all the fees.